Credit Crunch Hits Hockenheim.​
Hockenheim could join a host of Formula 1 casualties just two months shortly after the Canadian Grand Prix was slashed off the list due to
them not being able to pay the commerical rights. The French grand prix has also been removed off the list due to have the same problem
as other circuits and going into financial difficulties. Could this credit crisis have a massive effect on what is probably one of the
most exciting sports? With Silverstone losing out to Donnington Park, if they can get the improvements to the track done. Is it looking
like most of the races will end up in rich countries or out in the United Arab Emirates where money is no object! Hockenheim did a rotation
system with the nurburgring where the race will be held next year.

Testing Time Begins.​
As the season drew to an end it was not even a month before the teams started to get back on track and test their new equipment and designs
for next seasons cars. With so many new restrictions put in and finally the reintroduction of slick tyres its interesting to see what the
teams have come up with. The first thing most noticeable on the testing cars is the strange looking spoilers and odd looking new noses.
Whether these are just for test purposes or they are going to be the new design cars is yet to be confirmed. No doubt we will find out in
due course as the weeks pass and more testing is carried out. 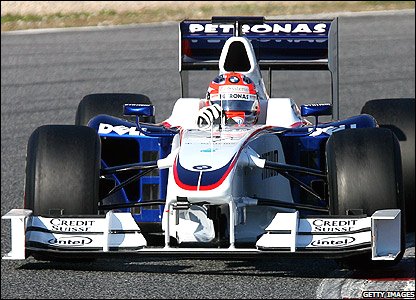 Back From The Dead.​
The first time I read his name in the news I had to take a second look and gather my bearings before jumping to conclusions. But probably
one of the biggest names in motorsport could be making another entry into F1 as the late great Ayrton Senna's nephew Bruno Senna has been
testing for Honda this season as it looks likely the highly experienced Rubens Barrichello could be leaving the Japanese team. Bruno Senna
who came 2nd in the GP2 Series this year is being tipped to be a real hit in F1. Could this just be from living off his Uncle's name? In
my view of it I think time will tell and I do hope he has real talent and is successful as his Uncle was a legend and will live long in alot
of F1 fans memories so he has alot to live upto. He completed 39 laps during the first testing and was only 2 seconds off the fastest lap. 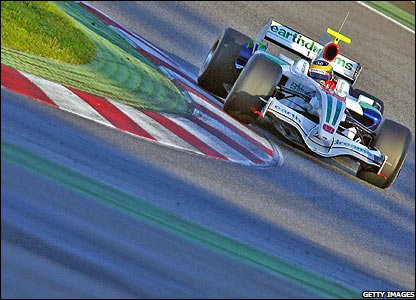 A Number of Special Test Drivers.​
A few years back now 5 times MotoGP champion Valentino Rossi jumped into the seat of the prancing horse and tested for Ferrari as he was
looking to take his career to another level. He set a time on the day 2 seconds slower than the no.1 driver at Ferrari who so happened to
be 7 times F1 World Champion Michael Schumacher. And now for a second time Valentino Rossi has jumped into a Ferrari again but this time it
was just to celebrate a great season for Rossi and Ferrari at the Mugello circuit. Is this a way of Ferrari calming claims he will be driving
for them in the near future? Who knows, but it would certainly make Formula 1 more interesting as it would add more flair than Lewis Hamilton
brings to the sport. And lets face it Lewis Hamilton is the best thing to happen to F1 as he has brought the popularity back to what it used to
be like during the Senna, Hill, Schumacher etc etc. days. Rossi has a huge fan base and would certainly be massively followed if he did decide
to go from the 2 wheels into the 4 wheels of the Italian monster. Also another familiar face in motorsport has turned up for a bit of testing
but this time with Red Bull five times World Rally champion Sebastein Loeb, whether this is just a publicity stunt or he is actually interested
in becoming a formula 1 driver is yet to be confirmed. 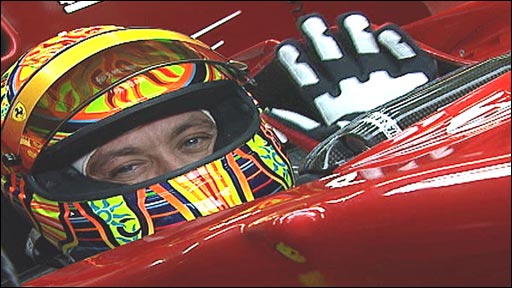 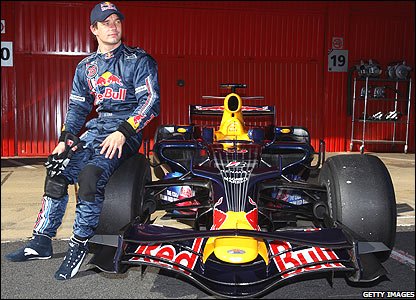 Webber Suffers Huge Blow To Testing​
Mark Webber everyones favourite aussie has sustained a major set back to his F1 pre season testing with Red Bull after having an accident on his
bike. Webber was on a charity bike race in Tasmania when he collided head on with a car and broke his leg. He was air lifted to hospital and
has now had his leg put in a cast and is on crutches. This is a major blow for the 32 year old who had a good season. He claims that he will be
back and ready for testing in February only one month before the season starts.


Has Bernie Lost The Plot?​
Now as most people have already read this article about the possible new scoring system Bernie Ecclestone wants to introduce I won't go to much
into it. Basically what the head honcho of F1 wants to introduce is a kind of medal system where you aren't scored on where you come it is scored
on how many races you win. So in theory if this was in place last season Massa would of been champion. Now surely this system will be kicked to
the kerb by the FIA. I certainly would not be very happy as a fan if they brought this new system in. He claims it will encourage the smaller
teams to try and win but can you really see them being able to compete with the big 4, Ferrari, Mclaren, Renalt and BMW Sauber. Ok there has been
some shock wins this season with another F1 record being broken from Sebastien Vettel's win becoming the youngest ever driver to win a Formula 1
race. But this is not the point, why get rid of a system that works and everyone is happy with to bring in a stupid system that makes no sense
in Formula 1. Is it time for Ecclestone to step down? Is he going senile? Well if this goes through then YES would be the answer to my question.

Its only a short one as I am testing the water on the success of this as a whole. I intend on doing race by race reports aswell when the season starts.

Feedback and comments are much appreicated and taken into consideration.