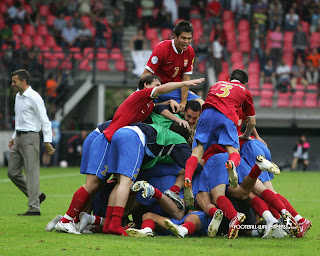 Background: South Africa 2010 will be Serbia's first World Cup as an independent nation after previously competing as Yugoslavia and Serbia and Montenegro. As Yugoslavia they reached the World Cup Semi-Finals twice, in 1930 and 1962, but overshadowed this by winning the European Championships, winning Gold in the Olympics football competition and winning the World Youth Cup in 1987, something which remains important to the Eastern Europeans as their youth teams continue to sihne.

Qualification: Although Serbia qualified from a relatively easy group, seven wins out of ten is still an impressive performance, particularly noticing that one of these wins involved the 5-0 thrashing of Romania, helping them to gain top spot over France. However, the Serbians failed to beat the French, drawing 1-1 and losing 2-1, and also suffered a disappointing 2-1 loss at the hands of Lithuania, who won just four games. A strong goal difference saw them concede just eight goals, scoring 22 in qualifying.

The Team
Strengths: A back line involving Nemanja Vidic and Branislav Ivanovic, two of the Premier Leagues best defenders, will be hard to beat but it is not just in defence that Serbia excel. Milos Krasic and Milan Jovanovic, who has recently agreed to sign for Liverpool in the summer and scored five goals in qualifying, on the wings provide an attacking threat with creativity and skill which provide the service for the frontmen, most notably, Nikola Zigic, who scored three in qualifying.
Weaknesses: However, their frontmen are their problem. Zigic is inconsistent and at 6ft7in is more of a targetman than a poacher, and his usual partner Marko Pantelic provides more assists than goals; in 29 caps he's scored just five goals. There is also worries regarding the goalkeeping position; undisputed number one, Wigan keeper, Vladmir Stojkovic, has made just sixteen league appearances in three years, while the other three keepers in their provisional squad have just five caps between them.
The Manager: An experienced player and manager, Antic, an ex-Luton player who famously kept the club up with a late winner on the final day in 1983, has gone onto manage Real Madrid and Barcelona, remarkably winning the double with Atletico Madrid in 1995-96. However, his appointment was met with mixed reactions in September 2008, his first game saw only 15,000 fans come to watch, but 'Raddy' has since become a father figure to the squad and is growing in popularity.

Star Men: Milos Krasic (CSKA Moscow)
Certain to attract the attention of the World's biggest clubs this summer, Krasic has electrifying pace down the right wing accompanied by a superb first touch and fantastic passing abilities. His shooting skills are also way above average and have helped him to become somewhat of a fans favourite in Serbia. With 29 caps at the age of 25, the Serbian has already won the Russian Cup and the Russian Super Cup this year but after disappointingly finishing fifth in the Russian Premier League he will be more hungry for victory than ever before.
Dejan Stankovic (Inter Milan)
The opposite applies to captain Dejan Stankovic, who this year won the treble, including the Champions League, Italian Serie A and the Italian Cup, under the guidance of Jose Mourinho. The experienced centre-midfielder will be making his third World Cup appearance, with a different country each time (Yugoslavia in 1998, Serbia and Montenegro in 2006 and Serbia in 2010). His strength and skill provide a threat while he also scores his fair share of goals, thirteen in 86 caps is far from a bad record for a midfielder.

manor15's Prediction
Second Round. The Serbians undoubtedly have their biggest chance of doing well in the World Cup since the dissolution of Yugoslavia this summer and their strong, tough defence will be hard to beat. They are also a threat going forward with two quick, attacking wingers, and will have no problem finding the net, although they may have to keep their fingers crossed that it is the in form Nikola Zigic that arrives in South Africa, which they have high hopes of after a morale boosting loan at Racing Santander, where he is a crowd favourite and managed thirteen goals in nineteen appearances.